COVID-19 Update: Tarquin continues to trade through its website and through third parties. We expect to continue to do this, but we must expect some delay in supply to us, which may affect deliveries.

ProRadian Protractors Added to the Stable!

At first sight, nothing could be more a commodity than a protractor for mathematics teaching. But not so!

Teachers and teachers of teachers have long sung the praises of the Tarquin 360 degree protractor and they are very widely used in UK schools. So popular are they that we have a 36cm version so that teachers can demonstrate on a whiteboard using the same design as the students are using in their pencil-case sized protractor. Teachers have also used the larger size for outdoor geometry - getting children to measure the lines on the football field, or the decorations on the walls.

And we also sell the Angler 180 degree protractor - one ideal for those who have angle confusion. One side reads left to right, the other right to left - but neither side is visible from the other.

Also great for special needs is the Polydron Potractor too, which brings angles to life. The unique patented protractor is perfect for measuring the angles on Polydron and other 3D applications.

Learning conventional angle by the most appropriate means!

But there are also Radians... 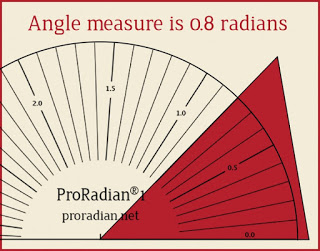 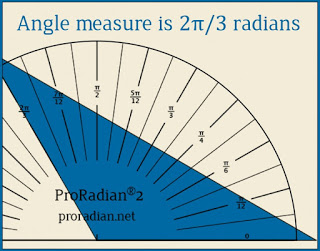 And now we have the ProRadian protractors. Radian measure is a fundamental concept in geometry, trigonometry, calculus, and physics – yet most students, and too many teachers, do not understand it. These protractors let students learn about radians in the same way you learned about degrees – by measuring. Two scales for students: 0.1 and Pi/24. And also a professional version below which measures in 0.01. 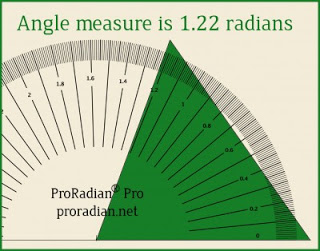 Posted in News By